It took 19 very enthusiastic volunteers only two hours to clear a pair of boulder dams from Traphole Brook in Walpole last month. But the native brook trout for which Traphole is famous, were even faster, moving up through their newly restored habitat just 30 minutes after the dam had been cleared.

Armed with heavy pry bars, tarps, hand trucks and shovels, the volunteers set to work on the two small boulder dams at 9 am. We had expected the process of removing and re-positioning the boulders to be much more challenging than it actually was. In fact, we had come with a number of elaborate strategies and tools for moving heavy rocks with only people power and we were counting on two days worth of work, but in the end 120 minutes of simple grunt work was all we needed.

The volunteers included some of our most tried and true river cleanup volunteers, several nearby residents, a few NepRWA Board Members and two members of the Greater Boston Chapter of Trout Unlimited. All the volunteers seemed to be energized by the opportunity to make one of the Neponset’s healthiest streams even better.

Perhaps most excited of all were our volunteers from Trout Unlimited who were very impressed with the quality of the existing stream habitat in an area so close to Boston, and thrilled by the chance see the sections of stream above and below the barriers reunited into a single continuous habitat that will be more than the sum of its previously fragmented parts.

You can view all the photos of the day over on our flickr site.

It is unclear why the two dams had been built years ago, but they seemed to be associated with two long abandoned cart paths through the woods. Whyever they were there, they were clearly preventing the brook and brown trout that call Traphole home from being able to move up and downstream freely to seek spwaning habitats in the fall, deep cold “holes” in the heat of the summer and food year round.

Rather than completely removing the barriers, it was a question of strategically clearing away just enough boulders to make the stream passable year round and positioning the remaining rocks to create a lively “bubbling brook” habitat what will help keep the stream burbling and well oxygenated.

By removing the two obstacles we hope to see the existing population of naturally breeding trout become become larger, more robust, and more resilient to the impacts of both human development and climate change, both or which are major issues for these beautiful but sensitive fish species who demand consistently clean and cold water to thrive. 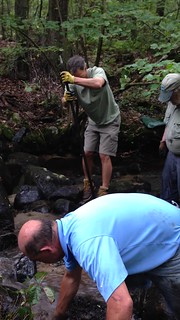 Video of the volunteers in action

This successful day’s work got started two years ago, with the help of donations from 154 NepRWA member families and a small challenge grant, that enabled us to launch our small dams program. Having spent many years (and still counting) working to restore the Neponset’s historic herring and shad runs past two of the river’s biggest dams in Dorchester, Milton and and Hyde Park / Mattapan, the Small Dams Program has allowed us to focus on tackling some easier targets After some initial difficulties with our original sites, we identified the two barriers on Traphole and a trio of dams on Pine Tree Brook in Milton as our first sites from among the roughly 100 dams on the Neponset and its tributaries.

A huge thank you also goes to Siemens Healthcare Diagnostics who owns the site and was excited to see the unusual natural resources on their property enhanced.

One of our goals on Traphole was to see whether for some of our smaller structures, it might be possible to do the restoration with old fashioned human labor rather than by using heavy equipment which entails significant expense as well as being much more disruptive to the environment. In that regard, the work at Traphole has been extremely encouraging and we hope to apply this same low tech approach at other sites.

Video of the restored brook

Work is ongoing along Pine Tree Brook where the dams involved are somewhat larger and require a higher level of engineering before restoration can occur. On Pine Tree Brook we have partnered with Wentworth Institute of Technology, the Mass Corporate Wetlands Restoration Partnership and Milone and MacBroom Engineering. We hope to be ready to submit permit applications for work on Pine Tree Brook within 18 months.

In the meantime, we will be looking for other small structures to restore, including more that lend themselves to volunteer only efforts.

Know of a site that’s ripe for stream barrier removal? Have a group that would like to help with a restoration project? Leave us a comment below of contact Ian Cooke at 781-575-0354 or cooke@neponset.org.