It was chilly and gray a few days before Christmas at Ryan Playground in Mattapan on the banks of the Neponset River, but the weather did nothing to dampen the spirits of the 100 or so people in attendance to celebrate the ground breaking for the next segment of the Neponset River Greenway bike and pedestrian trail.

The construction to follow will connect the two existing segments of the Neponset Greenway Trail, one that runs upstream from Pope John Paul Park in Dorchester to Central Avenue in Milton, the other which starts at Mattapan Square and runs (or soon will) all the way upstream to Neponset Valley Parkway in Hyde Park. This gap between Central Avenue and Mattapan Square will soon be filled in with a bike path, a bridge across the river near Ryan Playground, and a canopy walk to carry the trail over the MBTA’s high speed Mattapan trolley line.

Once it is complete, in an estimated nine months, pedestrians and cyclists will be able to go nine miles along the Neponset River all the way from Neponset Valley Parkway in the Readville section of Hyde Park near Fowl Meadow, downstream through Mattapan square, Lower Mills, and Pope John Paul Park to Dorchester’s Tenean Beach at the mouth of the Neponset River Estuary on a dedicated bike path. Another phase of the project, which is also getting underway shortly, will make the final link from Tenean Beach, behind the painted gas tank and onto Morrisey Boulevard near UMass Boston and on to the Boston HarborWalk. 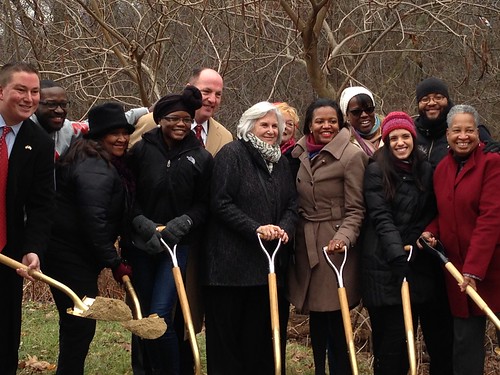 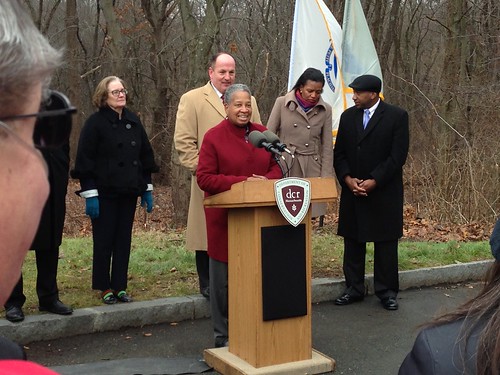 Vivien Morris of the Mattapan Food and Fitness Coalition

The work is being funded by the Mass Department of Transportation under the leadership of outgoing Governor Deval Patrick who has overseen very significant investments in state properties along the Neponset during his tenure.

The event was the culmination of more than three decades worth of work by current and former legislators, many extraordinarily dedicated community activists, committed state staff, and the Boston Natural Areas Network, with ample encouragement along the way from the Watershed Association. The result has been a transformation of the land along the Neponset River from a fenced off industrial wasteland into a thriving urban parks corridor, which is currently attracting more than 10,000 users a day, a figure which is expected to surge to 24,000 a day once the entire route is complete.

For a map of the entire route and links to more detailed documents visit the Neponset River Corridor website.

Or you can view the official state press release.